Wednesday of this week, 29 June, was the feast day of Ss Peter and Paul.  While each is also celebrated individually in January, the Church had tended to highlight this joint celebration of the two great apostles.

That is because of the tradition that both were martyred in Rome during the persecution of the emperor Nero.  Peter, a Galilean and thus ‘common’ person was executed by crucifixion, as you will recall from the death of Jesus, while Paul a Roman citizen, was beheaded with the sword.

The symbol of St Peter is thus a cross, but turned upside down since he declared that he was not worthy to die in the same manner as Jesus Christ. Thus for St Peter, his symbol is the inverted cross and crown while St Paul has the sword and crown.

That is the background today for you Terry Wilke as you come to be invested into the Order of St. Lazarus but we are all reminded that we wear the Cross on our mantles because our commitment is to Jesus who reveals God’s love for us and for the world through the cross.  Our Order, as other military Orders, draws on the imagery of knighthood and it is St Paul who gives a spiritual meaning to the armour with which we are to be clothed. (Ephesians 6 v. 13ff)

There is something about St Peter which draws me to him in that he comes across as unsophisticated and vulnerable unlike his companion St Paul who while declaring his shortcomings is almost too ready to justify himself.  Peter was formed by the long hours of being a fisherman and when Jesus called him he was generous in leaving all together with his brother Andrew, to follow Jesus.

He enthusiastically declared his commitment, in the upper room to die with Jesus and then some hours later denied knowing Jesus to a serving maid.

Yet, after the resurrection he becomes the leader of the Church and boldly preaches Jesus on the day of Pentecost. There is thus great wisdom in this tradition which sees Peter and Paul commemorated together when they could be such opposing figures in the early Church.  Together they provide the foundation of the Church and thus of our Order.  They present you Terry and all the members of the Order to examine our commitment both to Jesus and to the diversity they represent.

Look around and see if we represent the diversity of either our country or Province of the Western. Cape. Not only are we being challenged in making real our expressions of charity but how do we today embrace those who, for whatever reasons, are excluded from society in the way that the lepers were in or Lord’s day?

Last Friday at the Vigil at St George’s cathedral for the victims of the Orlando massacre, a friend told me that a group of women, who had hoped to attend the Vigil, had their “shelter” raided under the bridge in Woodstock because they are a group of transgendered persons.

Who are the ones we exclude in our society today?

“As for you, always be sober, endure suffering, do the work of an evangelist, carry out your ministry fully “

I know that some members of our Order have over some years now, been looking at how we in the Western Cape may give expression to the inclusivity of the Gospel and the foundation of our Order.

Like the Saints, Peter and Paul, we must be prepared to move out of our comfort zones to where the Spirit leads us as St Peter found when the Spirit lead him to engage with the Gentile community and, breaking all taboos, share a meal with them

He gives an account of that life-changing event in Act as 11 vv. 1-18 so that even those who had opposed this reaching out beyond the Jewish community responded:

“Then God has given even to the Gentiles the repentance that leads to life“  (Acts 11 v.18)

The charism of our Order lies in reaching out to any who may be treated as lepers but we respond not just as individuals but also corporately, finding strength from one another.  Looking around our world today we see a wounded and broken society both here at home and in our continent and the work of the Order of St Lazarus may change from its original expression but we are to follow where Christ leads even, as with Ss Peter and Paul, in losing our lives for the sake of the gospel.

Terry, may you and all the members of the Order follow Christ and through his grace be made worthy to wear the Cross that we too may receive the crown of life. Then, with St Paul, we too may say:

To God who gives us that grace be glory and honour and power, now and always.  Amen. 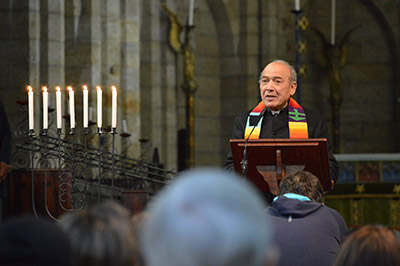