Archbishop Thabo Makgoba, the Anglican Archbishop of Cape Town and Metropolitan of the Anglican Church of Southern Africa, was presented with an Episcopal Ring symbolising his office at Evensong at St George’s Cathedral on 26 May 2013.

The ring was presented to him by the Grand Bailiff Tamra Capstick-Dale and members of the Order. The Venerable Richard Girdwood Archdeacon of Groote Schuur and Chaplain to the Order preached the sermon and the choir from the George Washington State University sang during the service.

The history of rings worn by Archbishops can be traced back to around A.D. 610. At that time rings were always designed around a single stone, often an amethyst. Although styles have changed over the centuries, the ring remains a symbol of the office of Archbishop and a symbol of his leadership over his people. Each ring is usually specifically designed for one Archbishop.

The new ring has been designed specifically for Archbishop Thabo by Mario’s Jewellers in Cape Town, and comprises an amethyst, engraved with the Diocese of Cape Town’s Coat of Arms on the shoulders of either side of the shank of the ring, and is vertically engraved with the Maltese cross, the symbol of the Order of St Lazarus.

Archbishop Thabo has never had his own ring and has been wearing one on loan from another bishop. Tamra Capstick-Dale said the National Council of the Order of St Lazarus had taken a decision to make this gift to him to mark his consecration and position as Archbishop of Cape Town and in recognition of his work with South Africans most in need. 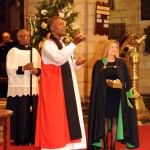 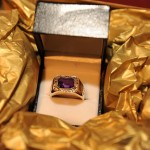 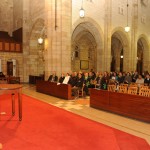 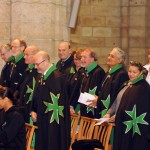